Have I got a Hornets Nest? 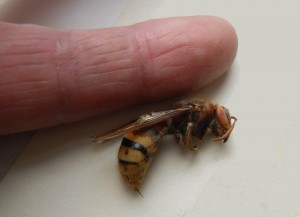 Hornets are much larger than wasps

Hornet Nest Removal
5.0 rating based on 12,345 ratings
Overall rating: 5 out of 5 based on 5 reviews.
Anonymous

Many people know when they have hornets in the garden or around the house in Norfolk. Their size gives them away as they are much larger than wasps and make quite a racket when flying.

Hornet nests are more prolific in remote areas of Norfolk, typically sited close to wooded areas. The nest is usually to be found in outbuildings, attached to the roof area or in the loft space between May and the end of autumn. As the nights begin to pull in during October, hornets become more noticeable because they are attracted to widows at night that have a light on inside. They hover outside, occasionally tapping the window appearing to want to come in your house. It’s not really the case as hornets, like many insects, are attracted to light. Wasps, though are starting to die out so  do not often have this behaviour.

Hornets are larger than the common wasp. They can be confused with queen wasps, so if you think you’ve seen a hornet during February to May and you are living in the middle of Norwich the chances are that it’s a queen wasp.

Hornets are similar in colour to wasps. Hornets have a black body with yellow markings on their head and abdomen. Their nests are usually coned shaped made of thin greyish paper that the worker hornets have made from masticating wood shaved from nearby trees, fences etc. There are not as many hornets inside a hornet nest compared to a wasps nests – only 400-500, but usually much less than this. wasps can have vastly more inside their nests.

The life-cycle of hornets is similar to wasps. They have the same diet too.

Do I need to get rid of hornets?

You need to weigh up the risks to you, your family or pets getting stung. Also, assess whether you, or possibly your employees, are allergic to hornet or wasp stings. Remember hornets can be aggressive if their territory or nest is being tampered with. Never attempt to remove it yourself. You may consider the nest is out of harms way and decide to leave it there. Hornet nests are never re-used. Horses and hornets do not mix so they have to be killed off as quickly as possible (the hornets – not the horses!)

How do you get rid of hornets?

We will visit your property to ascertain were the nest is and the correct method to destroy the nest. It’s a safe process and we will advise you what to do after the work has been carried out.

Norfolk & Norwich Pest Control operate seven days a week and have bookings available usually the same day. You can call us over the weekend or evenings to book. We also offer free advice.